One day I opened Youtube, clicked on one video that I can‘t remember now and the flick started playing with echo. I mean, the sound was with echo on Windows 10 platform.  At first my thought was – somebody messed up the sound configuration while making the video. So I listened to it (the sound was somewhat similar to coming out of a cave) and din‘t bother much. Next time I tried to listed – the same thing happened. Youtube problem? No way, all the digital audio whether video or simple MP3 were with echo.

To cut things short, after Windows 10 update my Realtek audio somehow „decided“ that my current sound environment was no longer suitable for me and changed it to „arena“ effects. That was the cause of the cave/ arena sound. I also browsed some forums and there were also other causes for this weird cave sound coming from headphones. Some people reported that after updating their audio drivers they got rid of the echo. Well, I will bring up what worked for me.

To change that annoying echo sound on Windows 10 (or check if it‘s enabled) follow these steps: 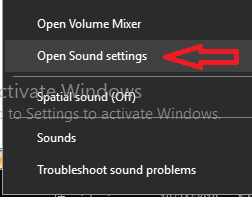 2. In the next window select your output device and click on device properties.

3. In newly opened Realtek (that‘s my sound card, yours could be different) digital output properties window click on Enhancements tab and choose None in the Settings field. Then click OK and Apply and this should fix it.

Mine was set to Arena, you can also notice a Cave settings. So yeah, the sound coming from a cave in Windows 10 is the real deal – it exists. 🙂

This website uses cookies to improve your experience while you navigate through the website. Out of these, the cookies that are categorized as necessary are stored on your browser as they are essential for the working of basic functionalities of the website. We also use third-party cookies that help us analyze and understand how you use this website. These cookies will be stored in your browser only with your consent. You also have the option to opt-out of these cookies. But opting out of some of these cookies may affect your browsing experience.
Necessary Always Enabled
Necessary cookies are absolutely essential for the website to function properly. This category only includes cookies that ensures basic functionalities and security features of the website. These cookies do not store any personal information.
Non-necessary
Any cookies that may not be particularly necessary for the website to function and is used specifically to collect user personal data via analytics, ads, other embedded contents are termed as non-necessary cookies. It is mandatory to procure user consent prior to running these cookies on your website.
SAVE & ACCEPT